Welcome to The Mother Global Foundation

What Maai Lived By

"God, please teach us to smile, but never let us forget we had cried." 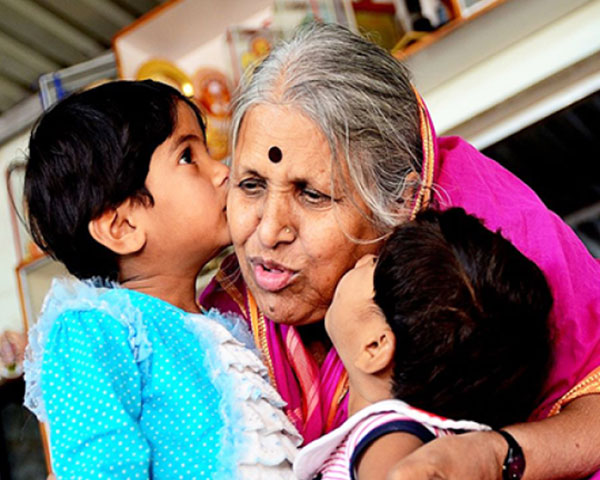 How an Orphan became 'Maai' & 'Mother of Orphans'

The life of Sindhu Tai Sapkal exemplifies the dictum that sometimes facts are stranger than fiction. Film-maker Anant Mahadevan found this dictum true when he ventured to make a film, Mee Sindhutai Sapkal on Sindhu Tai. He found her life so full of improbable incidents that he had to eschew some seemingly melodramatic incidents from her life to make the film look like a documentary of a real-life person. Just imagine a young woman of twenty, heavy in her womb, thrashed and thrown out of home by her husband in the middle of the night, giving birth to her baby in a cowshed, severing the umbilical cord herself by striking it repeatedly with a sharp-edged stone and walking away with the infant in her arms to spend the night under the starry sky. She spent her night in a crematorium to protect herself from drunkards and sexual predators. When she felt the pangs of hunger, she picked up the flour kept as offering near the funeral pyre and baked her bread on the still burning pyre. Homeless and with a child to feed, she took to singing and begging in trains. Often, she contemplated suicide but she continued her struggle for survival. One night she alighted from a train extremely tired, and sat down in a corner when she heard an old beggar, sick and hungry, on the verge of dying, asking for water. Sindhu Tai fed him with a roti and gave him water, which saved his life. This gave her the inspiration that she could save the lives of people and be of help to the helpless and destitute. This experience changed her life and she devoted herself to the care of the helpless, destitute and orphans. The altruism in her personality became the source of strength and made her the person that we know today as Sindhu Tai Sapkal.

An Awe-Inspiring Story of a Destitute becoming Mother of over 2100+ Orphans and an Inspiration for Millions.

Sindhu Tai was born in a poor, cattle-grazer family in November,1948 in Pimpri Meghe village, in Wardha district, India. She was an unwanted child and called Chindi (worthless in the local dialect). She was just literate with her formal education ending when she was in 4 th standard. She was married in her childhood to Shrihari Sapkal, 20 years older than her. She was a mother of two and expecting the third at the age of 20. Despite lacking formal education, Sindhu Tai had a mind of her own and was bold enough to say her thoughts. This enraged her husband and in-laws who could not come to terms with a young wife speaking her mind. She once complained to the district officer against the village chief for not paying the dues of villagers. The village chief got even with her by insinuating to her husband that the child she was expecting was not his. Sindhu Tai was thrown out of her husband’s house. Homeless and destitute, she had to beg on railway platforms to feed herself and her child.

Fate took her to Chikhaldara where she found that there were so many orphans and destitute who were leading cursed lives on the streets and railway platforms. She decided to take care of these orphans and adopted a sixteen-year-old orphan Deepak. Gradually, the number of orphans in her care grew and she begged more vigorously for them. Sindhu Tai found a natural empathy for the orphans as she was herself an unwanted child and became homeless soon after marriage. She adopted many other orphans and soon had a large family to take care of. Sindhu Tai gave her daughter Mamata to Srimant Dagaduseth Halwai Trust of Pune so that her adopted children did not feel that she discriminated against them or loved her daughter more than them. After years of homelessness, Sindhu Tai and her children got the first roof on their heads when some tribals whom she had helped, gave her a piece of land to make a shelter. Sindhu Tai registered her first NGO when she was asked for receipts by the donors who helped in her mission. The first NGO to be formed and registered by her was the Savitribai Phule Girls’ Hostel under the foundation Vanwasi Gopalkrushna Babhudeshiy Mandal, Chikhaldara in Chikhaldara in Amravati. Her first adopted son Deepak, who refused to leave her on growing up named the second NGO Mamata Bal Bhawan, after her daughter, Mamata. Her children run the other NGOs and handle her social work as unlike in other orphanages, her children stay with Sindhu Tai till they get a job and get married. Sindhu Tai’s compassion extended to animals as well and she founded the cow shelter, Gopika Gai Rakshan Kendra to save old cows from being sent to the slaughter-house.

Recognition of her work was universal as is testified by the numerous awards and felicitations that she received. She was conferred the Padma Shree, the fourth highest civilian award of the Republic of India, in the year 2021. She received hundreds of awards from various social organizations and trusts of which she used the award money to further her noble cause. Compassion, empathy, altruism and social concern are the sterling qualities that set apart Sindhu Tai and made her the icon that she was. Today, her extended family has hundreds of sons-in-law and daughters-in law. She has raised more than 2100+ children in 45 years. While government aid was not forthcoming, donations from people and organizations made possible the herculean task that she undertook and the feats that she accomplished. She also made money by speaking about her life-struggle and inspiring the audience. Life turned one full circle when Sindhu Tai was felicitated by her in-laws. Her husband, now lonely and destitute, wept through the entire program. Sindhu Tai invited him to her orphanage to live as one of her children. She proudly introduced him as her eldest child. The husband who took her home as his wife was now a responsibility of Tai.

Now that she has left behind her earthly struggles and embarked on the journey to eternity, it remains the responsibility of her children and other like-minded people to keep her mission going and she will keep inspiring them with her example.

Your Contribution can Change their Entire Life!
Donate Now